We continued to explore studio lighting for portrait work – so here are some of the shots from class, along with some iPhone snapshots of the lighting set-ups. I’m finding it hard keeping detailed notes of the lighting used for each set-up. We’re an eager bunch so, before you know it, someone’s invariably changed things a bit before you’ve had a chance to write down what’s going on. As I haven’t a flipping clue what I’m doing, I am having to make guesses based on scribbled diagrams and the actual shots themselves. I’ve had a stab at doing some diagrams based on these scribbles… the info’ on them may or may not be correct. 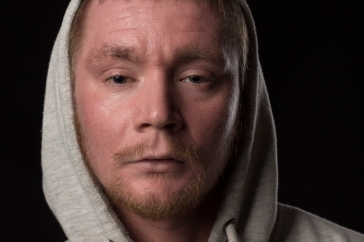 Presley’s first sitting: we started off with a medium softbox set front left at around 45° , 2ft or so from Presley. We then added another softbox at back right, about 3ft away and around 60 °to add some subtle highlight to the left side of Presley’s face.  So a bit like this diagram… 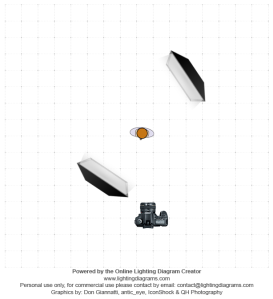 Monika: We started without the Softbox backlight – but as we were shooting against black and Monika was wearing black, we brought it back in to give some definition, before pushing it further back to strengthen the shadows. The effect veered from a loop/Rembrandt mix to very nearly split. 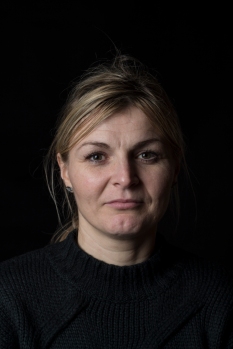 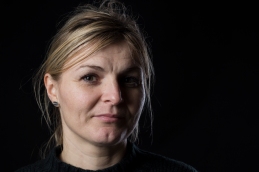 Presley’s second sitting: We tried split lighting with softbox alongside Presley, facing straight at him, before adding the second softbox back right for double rim lighting. We also moved the lights in and out to see the effect on shadow strength and brought in a reflector to add highlights.  So set-ups verging on this: 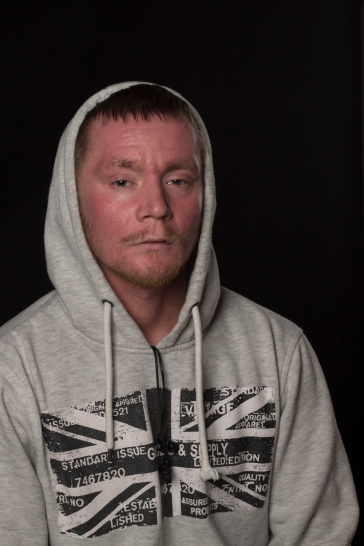 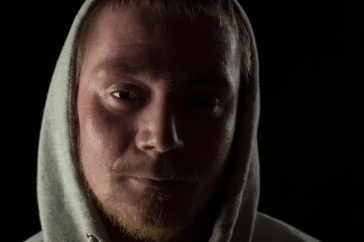 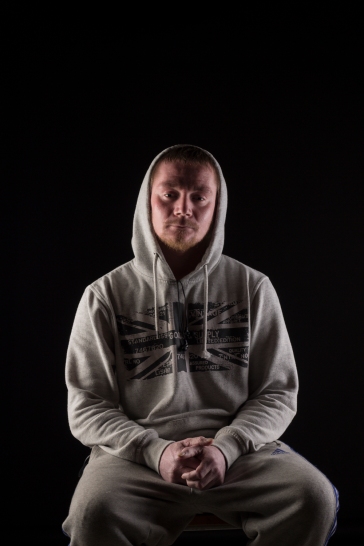 I don’t like the heavily shaded shots. Not sure what we were trying to achieve with lighting by this point but, whatever it was, I don’t think we managed it!

Here are some snapshots of the set-ups, which may give a better visual representation than my diagrams… 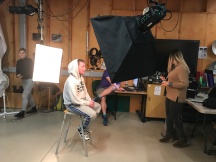 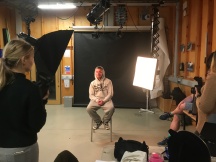 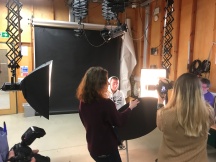 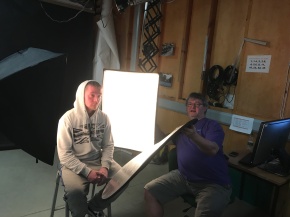 Monika kicked off this term’s presentations with one on American maternity and newborn photographer, Ana Brandt. Ana originally worked in web-design before moving over to photography. Adopted at 5-years old, Ana has no photographs of herself as a child and it was this desire to provide that for other families that led to her move into maternity and newborn photography in 1999. She wanted to provide beautiful images of families-to-be and families that have just begun. She has over 4,500 clients; teaches photography also and even designs trendy nappy covers and maternity dresses. A huge attention is paid to styling the images; she has an enormous array of outfits (the largest collection of maternity gowns in Southern California, for starters) and props in her studio. Basically, all clients have to do is turn up and she will see to everything. With the mums-to-be, she uses everything from silk to flour to enhance the bumps – the pictures are simple, classic and driven by the subject. She doesn’t aim to make someone something they are not but the pictures are very stylised and look more like fashion shoots than your typical “I’m pregnant” shoots. Lighting is invariably soft and flattering – she uses Profoto lights; softboxes; umbrellas; reflectors – and she works with fans a lot to create movement of fabric around the bump itself. I imagine that all her clients are very happy with the end result as they probably look way better in the shots than they actually felt being that heavily pregnant!

With the newborns, she likes to work with babies that literally are just a few days old – ideally less than 10 – this is because they are still incredibly flexible at this point and just eat and sleep – so catch them at the right time and you can shoot away without them even realising. She likes to use outfits and props that match on a colour theme, so that there are no distractions and the baby’s skin really pops out of the picture. The final images are a cute-storm. Monika also detailed the hygiene and safety considerations of dealing with babies on shoots: from poses that can cause them damage to overheating, along with the obvious mess that a baby not wearing a nappy can cause, there are lots of things you need to consider if you want to work in this line.  You can see more of Ana’s newborn work at bellybabylove.com

Ana is inspired by Anne Geddes and Ansel Adams. She uses a Canon 5D Mark III and mainly Canon lenses, including:

Monika explained Ana’s useful marketing tips, from noting 5 characteristics of your ideal client and then targeting where they shop, to surveying actual clients to find out how they found you, why they chose you and what social media they use. Things to remember if I ever get a photography commission!

Ana’s work extends to child photography and family photography. She has won numerous awards for her work and is considered one of the top 10 photographers in her field. (She doesn’t put her prices on her website but I suspect she makes exceptionally good money!)

One thought on “Portrait Photography – week 3”