Last night some of us (myself included) had our first stab at our still life project. Two studio set-ups were prepared, both with black backgrounds, and we split into two groups so we could assist when not shooting. It was very much a suck-it-and-see evening. If something didn’t work – the set layout/lighting/props – we changed it.

Variations on a theme… 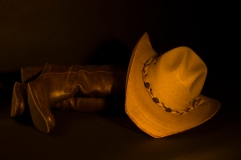 Horrible angle that didn’t work at all 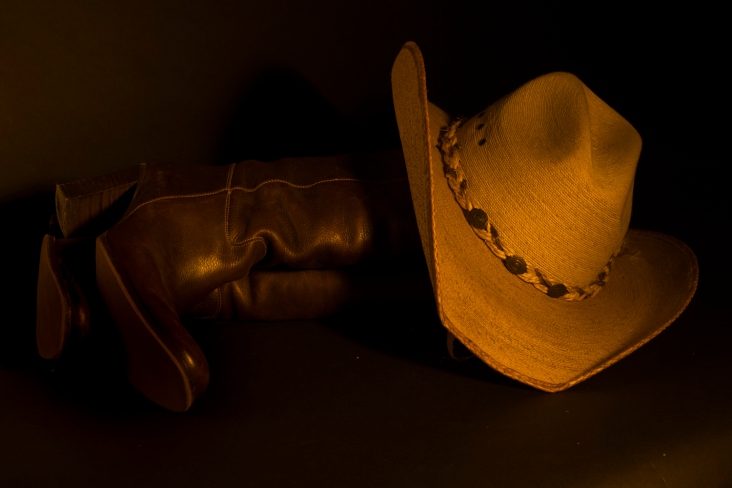 Reflector used to add light to underside of hat brim

I thought I’d find still life insanely dull. Instead, I got a massive buzz from us all working as a team; pooling the little studio knowledge we possess to problem solve and help each other inch towards the shots we’re after. 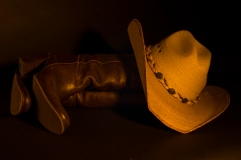 I wanted the feel of a summer evening’s golden hour, but to still have some drama and shadow… like a sun-dappled corner of a dusty old barn at the end of a long, hot day. So I added an orange gel to the snoot and then, later on, doubled it up with a yellow one (although I’m not sure the two made much difference). I decreased the light power from 3 to 1 and moved the light in and out from the subject to try to get the correct level. I also experimented with the barn doors, eventually settling on shutting them about 2/3.

I tried a shot or two without a gel and also with just a yellow gel, but they were all kindsa wrong and plain nasty. 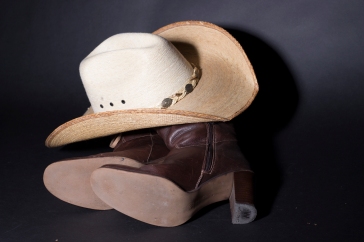 Zig, our tutor, kept reminding us to experiment with composition (to see what worked or didn’t) before worrying about lighting. Somehow, I did pretty much the complete opposite for most of the night. Zig was right, though: fewer shots of more layouts would have been a better use of my time. 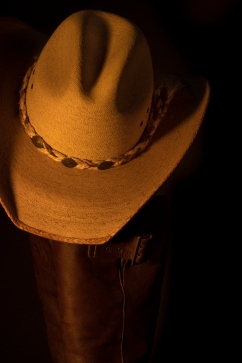 Focusing on the shot, it was easy to overlook the obvious… like composing my props centrally to start off. I was using a 50mm prime lens and, at one point, I couldn’t get the angle I wanted without overreaching the background. I spent, ooh, five minutes trying to work out how to combat this. Then it hit me: shift the set-up into the middle of the background. I know, right? 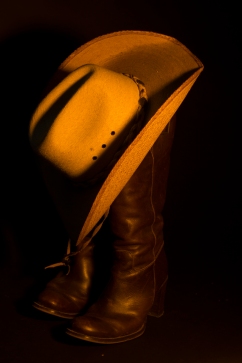 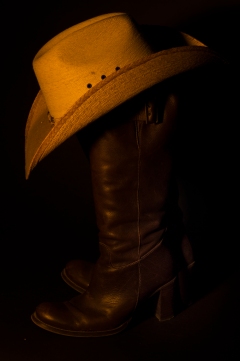 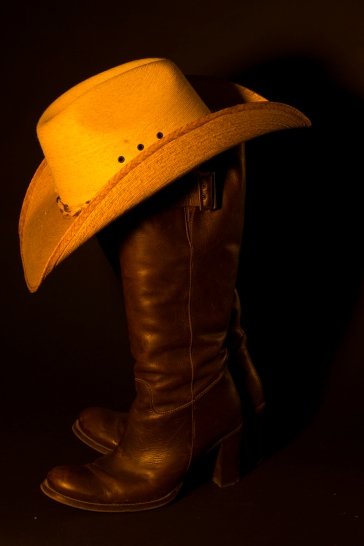 Hat too bright but better definition on boots 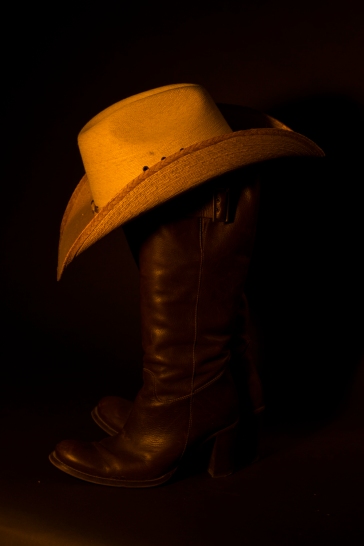 I think my inner-stylist kicked in as I went a bit Blue Peter: rolling up gels to stick hats on and balls of tissue to prop up teabags for one of the other shoots. (I’ve put double-sided sticky tape and bulldog clips on my shopping list for next time.) I like how the hat and boots worked together, but I may invest in a bundle of straw and some old rope (that can double as a lasso) to build the scene up a bit. 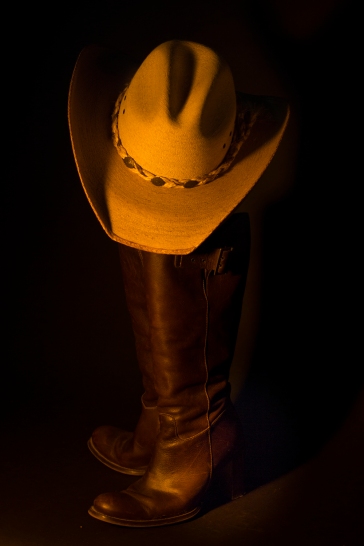 Colour desaturated a tad but heels too dark

I did a fair bit of editing on the final images, including a number of snapshot edits (some are shown here). The contrast between the light hat and the dark boots did create some issues. I had help from Monika, who used a reflector to bounce light up under the hat rim. 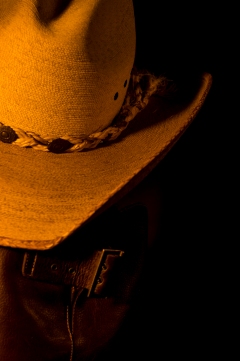 I’ve also done a little targetted editing to a few shots to compensate on some areas. For instance, in some shots, the heels of the boots were too dark, in others the soles too prominent. I also had a couple of images where I caught the reflector in the top corner, so I edited that out, too. I need to think about using a very soft backlight to just pick up the back of the boots so they don’t disappear into the background. I also need to think about leaving more empty space around the shot. If this really was a product shot there would be no space for any advertising copy.

Colour desaturated a tad but heels too dark

I’m pretty pleased with this first attempt. There are some layouts where I’m not happy with the soles of the boots, which loom too large and add nothing to the overall look. They’re not proper cowboy boots – if they were they’d have battered leather soles and beautiful, detailed stitching that would add interest – but the bland soles are just boring, so I need to work on the angle of shot if I’m to lay them horizontal again. I think the vertical shots work better for that reason alone.

Also some of the shots – even after editing – are a tad too bright and orange. Maybe it’s my computer screen as they looked alright in camera raw but look a little garish here on the blog. I desaturated some shots for an old-school western, where’s the Jack Daniels feel but maybe I should have done more of that? Be interested to know what anyone (all six of you who look at this blog) thinks. 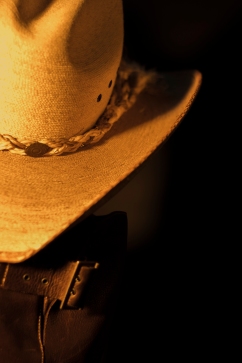 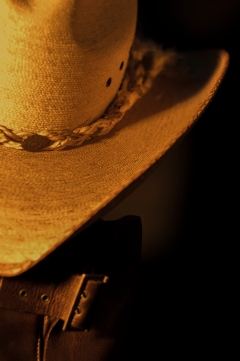 I also need to pay more attention to the finer details – some shots had the hatstring dangling awkwardly, others had the boot buckles not properly done up – and it’s little things like this that can make all the difference. I don’t want the viewer to be distracted by minor irritations.

Moans aside, the big learning outcome for last night was I really like still life.

Possibly because I don’t have to talk to it.

Well, f**k my old boots, as we say in these parts.